​meditationSHIFT - articles and research on the benefits of meditating.

note - we started this page over a decade ago, when research on the benefits of meditating wasn't as easy to find. Now, a quick search on the Internet will yield tens of thousands of results, with new information being published on a regular basis. As a result, we no longer update this page but will leave it up as it provides links to articles and research you may find informative.

If you are interested in learning more about mindfulness and meditation, we have a free guide that answers the following questions:
You can find it here (no email required).

--
​
A consistent meditation practice has many scientifically-proven benefits. There are hundreds of peer-reviewed articles and research papers, and the data is compelling.

We will start out with a piece from the APA that summarizes numerous studies and research findings. Scroll down to find additional links to articles and research on the benefits of mindfulness and meditation.

The information below is from the American Psychological Association. The original article can be found here:
http://www.apa.org/monitor/2012/07-08/ce-corner.aspx

The term "mindfulness" has been used to refer to a psychological state of awareness, the practices that promote this awareness, a mode of processing information and a character trait. To be consistent with most of the research reviewed in this article, we define mindfulness as a moment-to-moment awareness of one's experience without judgment. In this sense, mindfulness is a state and not a trait. While it might be promoted by certain practices or activities, such as meditation, it is not equivalent to or synonymous with them.

Several disciplines and practices can cultivate mindfulness, such as yoga, tai chi and qigong, but most of the literature has focused on mindfulness that is developed through mindfulness meditation — those self-regulation practices that focus on training attention and awareness in order to bring mental processes under greater voluntary control and thereby foster general mental well-being and development and/or specific capacities such as calmness, clarity and concentration (Walsh & Shapiro, 2006).

More specifically, research on mindfulness has identified these benefits:

Reduced rumination. Several studies have shown that mindfulness reduces rumination. In one study, for example, Chambers et al. (2008) asked 20 novice meditators to participate in a 10-day intensive mindfulness meditation retreat. After the retreat, the meditation group had significantly higher self-reported mindfulness and a decreased negative affect compared with a control group. They also experienced fewer depressive symptoms and less rumination. In addition, the meditators had significantly better working memory capacity and were better able to sustain attention during a performance task compared with the control group.

Those findings are consistent with evidence that mindfulness meditation increases positive affect and decreases anxiety and negative affect. In one study, participants randomly assigned to an eight-week mindfulness-based stress reduction group were compared with controls on self-reported measures of depression, anxiety and psychopathology, and on neural reactivity as measured by fMRI after watching sad films (Farb et al., 2010). The researchers found that the participants who experienced mindfulness-based stress reduction had significantly less anxiety, depression and somatic distress compared with the control group. In addition, the fMRI data indicated that the mindfulness group had less neural reactivity when they were exposed to the films than the control group, and they displayed distinctly different neural responses while watching the films than they did before their mindfulness training. These findings suggest that mindfulness meditation shifts people's ability to use emotion regulation strategies in a way that enables them to experience emotion selectively, and that the emotions they experience may be processed differently in the brain (Farb et al., 2010; Williams, 2010).

More cognitive flexibility. Another line of research suggests that in addition to helping people become less reactive, mindfulness meditation may also give them greater cognitive flexibility. One study found that people who practice mindfulness meditation appear to develop the skill of self-observation, which neurologically disengages the automatic pathways that were created by prior learning and enables present-moment input to be integrated in a new way (Siegel, 2007a). Meditation also activates the brain region associated with more adaptive responses to stressful or negative situations (Cahn & Polich, 2006; Davidson et al., 2003). Activation of this region corresponds with faster recovery to baseline after being negatively provoked (Davidson, 2000; Davidson, Jackson, & Kalin, 2000).

Counseling skills. Empirical literature demonstrates that including mindfulness interventions in psychotherapy training may help therapists develop skills that make them more effective. In a four-year qualitative study, for example, counseling students who took a 15-week course that included mindfulness meditation reported that mindfulness practice enabled them to be more attentive to the therapy process, more comfortable with silence, and more attuned with themselves and clients (Newsome, Christopher, Dahlen, & Christopher, 2006; Schure, Christopher, & Christopher, 2008). Counselors in training who have participated in similar mindfulness-based interventions have reported significant increases in self-awareness, insights about their professional identity (Birnbaum, 2008) and overall wellness (Rybak & Russell-Chapin, 1998).

Similarly, in a study of Chinese college students, those students who were randomly assigned to participate in a mindfulness meditation intervention had lower depression and anxiety, as well as less fatigue, anger and stress-related cortisol compared to a control group (Tang et al., 2007). These same students had greater attention, self-regulation and immunoreactivity. Another study assessed changes in symptoms of depression, anxiety and post-traumatic stress disorder among New Orleans mental health workers following an eight-week meditation intervention that began 10 weeks after Hurricane Katrina. Although changes in depression symptoms were not found, PTSD and anxiety symptoms significantly decreased after the intervention (Waelde et al., 2008). The findings suggest that meditation may serve a buffering role for mental health workers in the wake of a disaster.

Outcomes of clients whose therapists meditateWhile research points to the conclusion that mindfulness meditation offers numerous benefits to therapists and trainees, do these benefits translate to psychotherapy treatment outcomes?

So far, only one study suggests it does. In a study conducted in Germany, randomly assigned counselor trainees who practiced Zen meditation for nine weeks reported higher self-awareness compared with nonmeditating counselor trainees (Grepmair et al., 2007). But more important, after nine weeks of treatment, clients of trainees who meditated displayed greater reductions in overall symptoms, faster rates of change, scored higher on measures of well-being and perceived their treatment to be more effective than clients of nonmeditating trainees.

However, the results of three other studies were not as encouraging. Stanley et al. (2006) studied the relationship between trait mindfulness among 23 doctoral-level clinical psychology trainees in relation to treatment outcomes of 144 adult clients at a community clinic that used manualized, empirically supported treatments. Contrary to expectation, therapist mindfulness was inversely correlated with client outcome.

What might be behind these results? It could be that "more mindful" people are likely to score lower on self-reports of mindfulness because they are more accurately able to describe their "mindlessness." Conversely, people who are less mindful may not realize it and therefore may be inclined to rate themselves higher on such measures.

Given the limited research thus far on empathy, compassion, decreased stress and reactivity, more research is needed on how mindfulness meditation practice affects these constructs and measurable counseling skills in both trainees and therapists. For example, how does mindfulness meditation practice affect empathy and compassion for midcareer or late-career therapists who are experienced at mindfulness?

Shapiro and Carlson (2009) have suggested that mindfulness meditation can also serve psychologists as a means of self-care to prevent burnout. Future research is needed on not only how the practice of mindfulness meditation helps facilitate trainee development and psychotherapy processes, but also how it can help therapists prevent burnout and other detrimental outcomes of work-related stress.

In addition, despite abundant theoretical work on ways to conceptually merge Buddhist and Western psychology to psychotherapy (e.g., Epstein, 2007, 1995), there is a lack of literature on what it looks like in session when a therapist uses mindfulness and Buddhist-oriented approaches to treat specific clinical issues.

In conclusion, mindfulness has the potential to facilitate trainee and therapists' development, as well as affect change mechanisms known to contribute to successful psychotherapy. The field of psychology could benefit from future research examining cause and effect relationships in addition to mediational models in order to better understand the benefits of mindfulness and mindfulness meditation practice.

Daphne M. Davis, PhD, is a postdoctoral fellow at the Trauma Center at Justice Resource Institute in Brookline, Mass.
Jeffrey A. Hayes, PhD, is a professor of counseling psychology at the Pennsylvania State University department of educational psychology, counseling and special education. 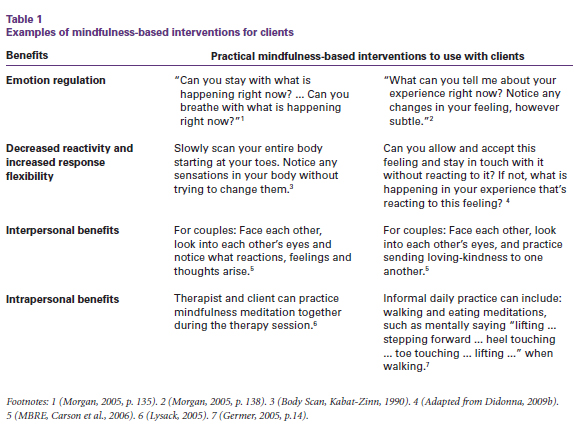 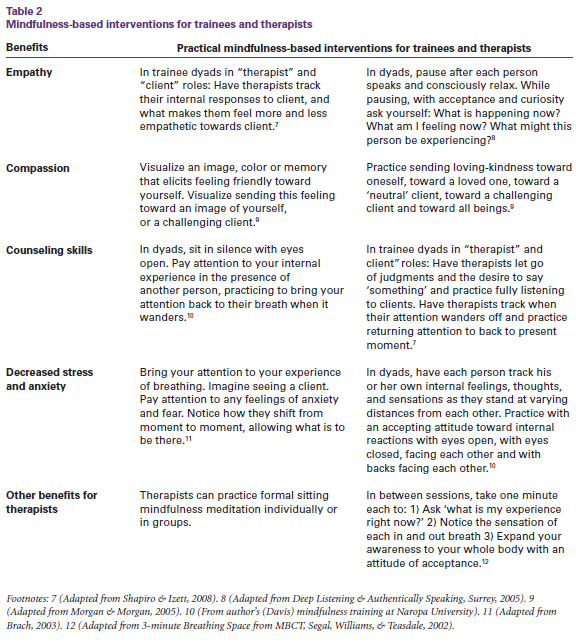 Links to additional research and findings on mindfulness and meditation:

The Scientific Power of Meditation (video)


A Wandering Mind is an Unhappy Mind (Scientific American)


A nice infographic from Happify, with sources noted at the bottom (click to enlarge).


Meditation and Health:  An Annotated Bibliography


NHS recognises that mindfulness meditation is good for depression


UCLA:  Meditation may increase gray matter (how to build a bigger brain)


What are the benefits of mindfulness (re-published above)


Meditation can lower risk of heart attack and stroke


​​Ready to learn more about mindfulness and meditation? Read our free guide here (no email required).​

You can't escape your mind...

​Address the root cause
​ of your struggles.